To celebrate the launching of the short stories collection Nouvelles de Malaisie in French, the Alliance Française will welcome 4 of the book authors for a special event. Come and discover contemporary texts of Malaysian literature and get to know their authors: Tash Aw, Shih-Li Kow, Anwar Ridhwan, Zurina Hassan and Saharil Hasrin Sanin.

After reading some extracts in their original language (Malay or English) and their French translation, take part into a conversation with the present authors and get the chance to have your book signed.

Paris-based Editions Magellan & Cie have recently published a collection of six Malaysian short stories translated into French. Opening up with two stories by Zurinah Hassan and Tash Aw on the Malaysia of kampungs faced with economic development, the collection then explores the Malaysia of cities and small businesses through two stories by Anwar Ridhwan and Shih-Li Kow, before closing on two texts by Saharil Hasrin Sanin and Preeta Samarasan dealing with more personal tragedies on love and family. Six voices at equilibrium, six parables of today’s Malaysia, each helping us understand better not only this diverse country, but also other multicultural nations in which our future is now being invented.

The extracts will be read in English and French, so will be the conversation. The French café ‘Chez Léoniel’ will be open during the event and will be serving food and beverage.

The event is open to all, upon booking at rsvp.afkl@gmail.com Please confirm your presence before the 13th of April.

Anwar Ridhwan is one the best known writers in the national language and his works have been widely translated. He won the Malaysian Literature Award for his short stories Perjalanan Terkahir in 1971, Dunia Adalah Sebuah Apartmen in 1973, Sesudah Perang in 1976 or Dari Kiev ke Moskova in 1992. His novel Hari-hari Terakhir Seorang Seniman came first in the Gapena-Yayasan Sabah Novel Award in 1979. His other works include Sangkar, Naratif Ogonshoto, Minda Melayu or Selatan. He received the Malaysian National Laureate Prize in Literature in 2009.

Shih-Li Kow’s short stories have appeared in several anthologies since her first publication in 2007. Her collection of short stories, Ripples and Other Stories was shortlisted for the 2009 Frank O’Connor International Shortstory award. Her first novel The Sum of Our Follies was published in 2014 and garnered international attention. She currently works in real estate and lives in KL with her extended family, cat and beehive.

Tash Aw was born in Taipei, Taiwan and was brought up in Malaysia. He moved to England in his teens and now lives in London. He is the author of The Harmony Silk Factory, which was the winner of the Whitbread First Novel Award and the Commonwealth Writers’ Prize for Best first Novel and was longlisted for the Man Booker Prize, and of Map of Invisible World. His latest novel Five Star Billionaire was also longlisted for the Man Booker Prize.

Saharil Hasrin Sanin is a writer and visual artist. His first two novels Luka Seribu Hati and Fashionista! were first published in the form of series in the magazines “Wanita” in 2006 and “EH!” in 2007. His essay Teroris Bahasa was part of the “New Malaysian Essays” edited by Amir Muhammad in 2008. His visual creations, in typical faux-naïf style, are a testament to his taste for parody and black humour. His widely-followed Facebook page, Saharilism, is regularly updated with new drawings, stories, photographies and illustrated anecdotes.

Zurinah Hassan is well-known for her poetry but she is also the author of many shorts stories, novels and essays in the national language. Born in Alor Setar, in the State of Kedah, she was awarded the SEA Write Award in 2004 ; in 2015, she was the first woman to be granted the title of Sasterawan Negara (National Laureate). Her works have been translated into several languages, including French, with her poetry collection Menghadap ke pelabuhan translated as En regardant le port by Jean Severy. 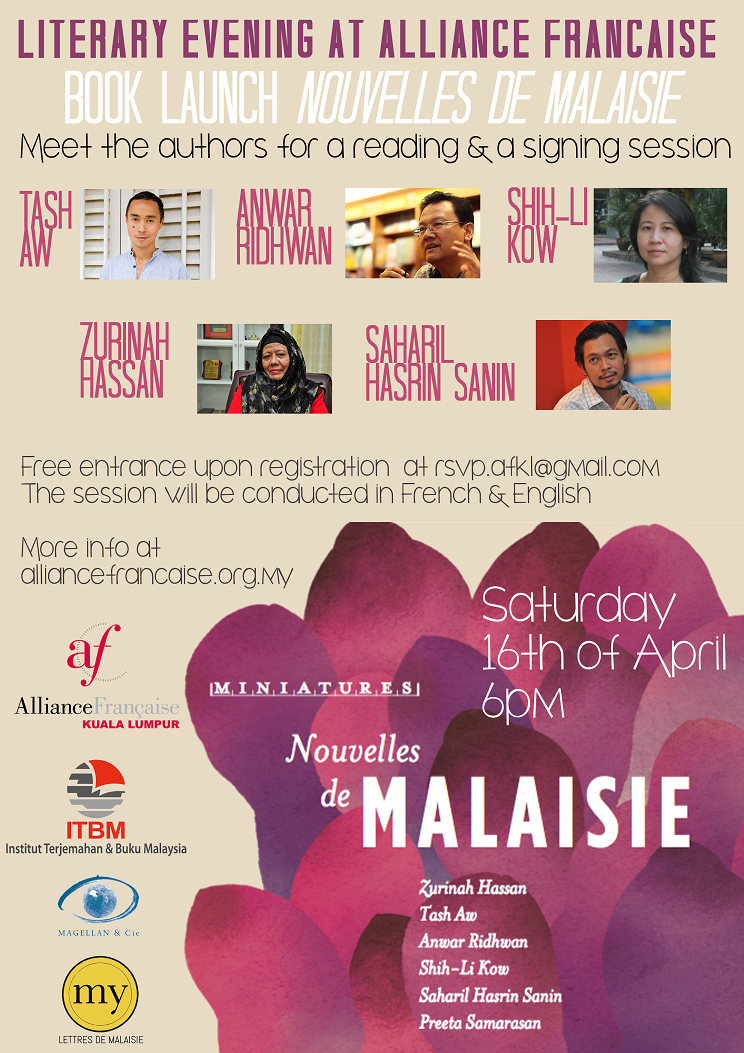