On the eve of Têt – the Vietnamese New Year, in the dark of night, our family bade farewell to our beloved homeland in Rach gia. Our little boat set off to the high seas as the wind was gathering force. Everything that happened next had been foreseen by my mother – everything, the tempest, the breakdown, even our capture by the Viêt-công patrol, everything, except for what follows below.

On May 2nd, 1976 when the Malay islands were at last in sight, we did not know yet that we were about to live one of the happiest episodes of our life in exile, that we would meet people among the most extraordinary. Their generosity and their kindness came from another era. We will never forget what these people gave us: their most precious belongings, their heart, everything they could. If today, in turn, we act as a shelter family for refugees, it is in the hope of paying homage to them, and to express our friendship and our gratitude to them. 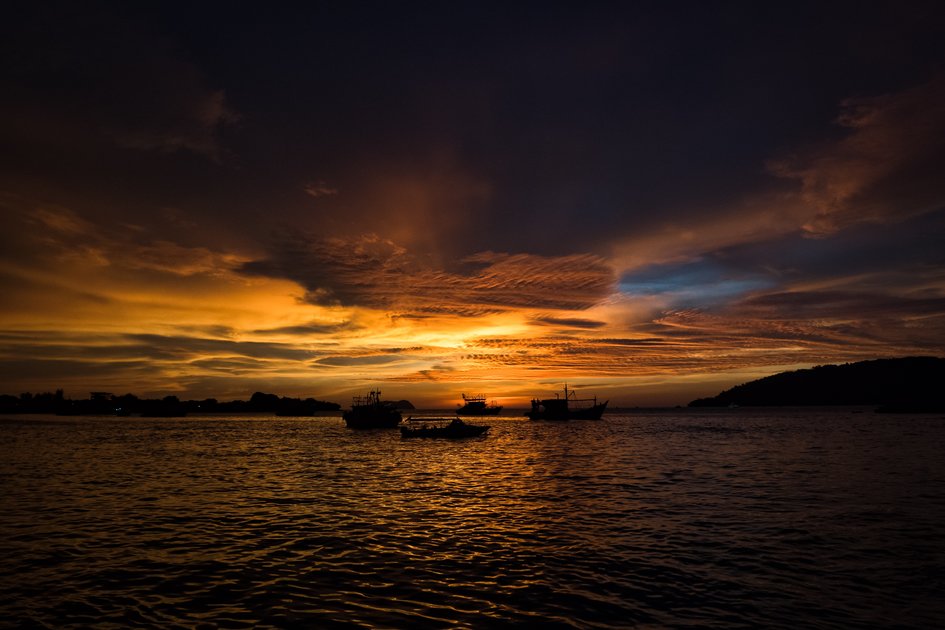 I would like to share my experience of being a refugee in Malaysia. I would begin with something which was unimportant to me at that time: the Malays were the very first Muslim people we ever met. We were completely ignorant of this religion. There were very few Muslims in Vietnam and they very much kept to themselves. As a matter of fact, our hosts actually hardly put any emphasis on their religion except when they made fun of us, watching us eat with chopsticks “like the Chinese” (at that time, the Malaysians were split in two halves, followers of two different religions: Muslims on the one hand, and “more or less Buddhists, more or less atheists” of Chinese origin on the other hand). We ended up eating like them, with our fingers, out of banana leaves. No dishes to wash. We drank soup from the same big bowl as our hosts. There was no coronavirus at that time, but we were still supposed to stay in quarantine on our boat because we were plagued with jungle scabies and lice. “Ghẻ giải phóng” – literally “Liberation scabies”, remained a calamity in Southern Vietnam for several years; it was said to have been brought by clandestine fighters when they came out of the bush.

But in spite of our explanations, our friends decided to shelter us under their thatched roof, in their house made of planks on stilts, when they understood that my mother feared that the communists might come after us as far as the island. We had received order from the police chief not to leave our skiff (there were 10 of us in the family). But every evening, our friends would come and fetch us in their rowboat, and they would discretely take us back home with them to the island. One of them would sleep on the threshold (there was no door to their houses) holding a long machete in order to “cut in two halves any communist who would dare venture there”. Finally, the police chief had conceded to lift the quarantine (we were told that his Colt revolver did not work). He was probably wrong though, because one week later, all the islanders were scratching their arms and legs, but none of them seemed to resent that. Yet, it took them one year after we had left to finally get rid of those bugs, thanks to sea bathing.

At the time we were staying on the island, women did not wear anything to cover their chest, or they wore a T-shirt and a sarong tied around their waist. They could wear their sarong up, above their breasts, but it was more for the sake of aesthetics than out of modesty. During festival days, the days with a full moon for instance, the women would wear colourful bras in lieu of formal dress, with the usual sarong tied around their waist: that was their evening attire. I asked them where the idea of such a strange outfit came from. They showed me old magazines displaying photos of beautiful Western ladies wearing those bras and posing smartly in sumptuous settings. Ads for bras! We were quite far from burkas!

I became friends with two girls. The oldest was 17. She was a strong-minded woman (girls got married at a young age on the island), she was solid and had an iron will. The young one was 13 and wanted to look like Marilyn Monroe: every morning, she would draw a mole on her cheek, watching her own image in a mirror and following the actress’ photograph glued by the side. I pointed out that her spot was on the wrong side, as the mirror reflected a reverse image of her face. It was a great disappointment for her, to think she had been the opposite of her model for years without knowing it. So I told her: but if Marilyn looked at herself in a mirror, as she probably often did, it was Youna (my friend’s name) she would have seen. It made her laugh a lot.

The elder one was engaged to a handsome young fisherman whose name was Youssof. But she fell in love with my adoptive brother. She came for him every day on the boat (where he used to stay to keep watch). As she was rather sturdy, the boat would pitch to one side whenever she climbed on board. Warned by this signal, my brother would jump into the water although it was full of sharks (white–tip sharks, quite harmless) and he would swim as swiftly as he could to the beach. It made the young woman laugh heartily. She did not take offence at all and went on chasing him during all the time of our stay. At the full moon festival, Youssof challenged my brother to a fight with sticks. It was a ritual exercise between two rivals in love with the same girl, more like a dance and devoid of any violence. It could be a beautiful show when it was well performed.

My brother refused to fight. He tried to make Youssof understand he was not responsible for his fiancée’s infatuation. However Youssof was adamant, his honour was at stake. At the end, my brother had to accept the fight, but he did everything he could to lose the stick – as when you lose your stick, you lose the fight, and the rule is such that one does not touch the body of the opponent. It requires more agility, to fight without causing harm. Youssof was happy, so happy that he held my brother in his arms.

Similar anecdotes were aplenty. Once, a man who owned a small food stall invited us to stop by his shop and offered us hot drinks and sweet glutinous rice. We declined the invitation at first, but he was so insistent. When we had finished our drinks, we could not pay for them. It was really a very modest shop, furnished with one table and two stools, and made of four stilts and a few planks. When we stood up to leave, he slipped a banknote into the pocket of my six year old little brother.

These people had nothing. They ate what they managed to fish, and when they needed to buy something in the city, three hours away by boat, they would leave with a shipload of fish that they’d sell for a bit of money, just enough to buy what they needed. In the few days after our arrival, they would swamp our ship deck with fish – all their catch of the morning! My mother, my sister and I spent the day removing the guts, drying the fish, or cooking them in Vietnamese style (ca kho). The villagers must have thought that we had nothing to eat under the communists. It was not entirely wrong.

That place was heaven for the kids: most of them did not go to school. Boys and girls used to play throughout the day, learning how to fish and to swim, which they did expertly. Girls did not embark for the high seas and they would only fish with rods from the shore, for fear that the spirits of the sea would turn the boat over to get hold of them.

I had noticed that the children were particularly strong-bodied. Unlike in Vietnam, families there did not have a lot of children. I rapidly obtained an explanation. My sister and I slept at a villager’s house. Our young hostess had just given birth to her baby girl who was two weeks old. She was placed at night all naked under the canopy. One very rainy evening she kept crying all night. The mother got up to feed her, only to put her back outside right after. I wanted to take her with me. But the mother stopped me, laying her stout arm on my shoulders. “Leave her alone. In one month, if she is still alive, she’ll never be sick.”

A few weeks later, we had to leave the island (we had unsuccessfully asked for asylum in Malaysia) to go to Kuala Lumpur, and then fly to Paris. My parents had received a little money from relatives in France, and so we organized a huge banquet in the village assembly hall (built on the lagoon). We invited everybody in the village. There was around a hundred people, and not enough room for everybody under the big roof. Some people attended from their boats gathered around the hall. We were happy that our friends accepted in a natural manner our “thank you”.

At the end of the meal, our friends invited us to join them in their prayer, our faces turned towards the setting sun. Early in the next morning, it was still dark when we left for the port of Terengganu. It was 4 am, torches and lighters were lit and were softly waving in the dim light as a sign of farewell. It was our first encounter with Muslims.

When, in the last days of April 1975, a few American dignitaries came to my parents’ house and pressed them to leave “with dignity” by a specially chartered plane or boat, my father refused their offer, declaring that our family would adapt, or share the fate of the defeated. My mother later had to organize our escape on her own, while my father was under house arrest. Once we were out of danger, in our paradise, she said: “Men have the courage to die. Women have the courage to live.”

This story is dedicated to all our Malay friends, in particular to Hamid, our mentor, to my parents - my father, master mariner who brought us safely to harbour, and my mother, who organized our escape with such courage and determination that only women can show in tragic circumstances.

The Embassy expresses its gratitude to Jeanne Thanh Dang for allowing us to publish this moving story. Our gratitude also goes to the on-line magazine Les Cahiers du Nem who has published the original version of this story, in French, at http://lescahiersdunem.fr/pulau-redang-pulau-penang-une-histoire-daccueil/

Translation in English by Hélène Ly-Batallan