France cultivates the European spirit of commitment to Defence and Security in Asia-Pacific.

The State visits by French President François Hollande to Singapore (27 March), Malaysia (28 March) and Indonesia (29 March), illustrate France’s close relations with these three nations of South-East Asia. In particular, the strength of the Defence partnerships was reaffirmed by Mr. Jean-Yves Le Drian who also made the trip.

France is particularly active in the field of Defence in the Asia-Pacific region. This is demonstrated once again by the choice of this region in which to conduct the mission "Jeanne d’Arc", that every year ensures the operational training of the officers-cadets of the French Navy. On 18 March 2017, the Landing Helicopter Deck (LHD) Mistral and the Frigate Courbet entered the Indo-Pacific space after their departure from Djibouti, where they conducted training and refueling activities. These were achieved thanks to the support of the French Forces permanently stationed in the territory of this long-standing partner state. 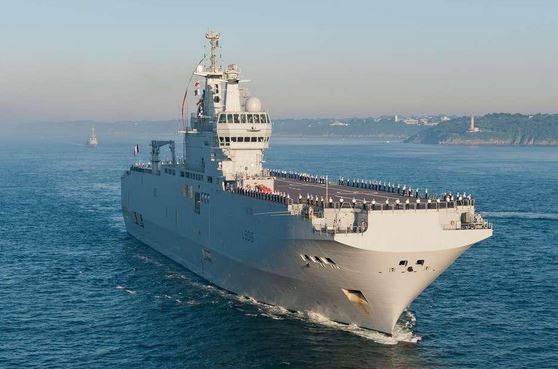 The naval task force began a four-month deployment in the Indian Ocean, China seas and in the Pacific. Two Merlin helicopters from the Royal Navy and a detachment of some 60 British Navy personnel are included on board the Mistral for the duration of the mission. This is a sign of the dynamism of the Franco-British Defence relationship and the increased European effort for security and stability in the Asia-Pacific region. Much like other Oceanic navies’ vessels, the French vessels will carry out multilateral exercises in order to develop our cooperation and our knowledge of the Indo-Pacific regions, which is certainly remote from Europe but not from the French territories. The deployment of the Mistral and the Courbet will also contribute to strengthening the strategic partnerships that France has formed with India, Vietnam, China, Japan, Australia and Singapore, all of which will welcome the "Jeanne d’Arc" naval task force during port calls.

Through these exercises and port calls, our Armed Forces exercise their freedom of navigation and ensure their missions of protection, presence and international cooperation as everywhere else. These missions are a testament to France’s commitment to a rules-based global order, promoting dialogue and better mutual understanding.

From Toulon to Guam, the Mistral and the Courbet will cover half the perimeter of the globe. France also has permanent sovereignty forces in its overseas territories of the South Indian Ocean and the South Pacific, providing more than 80% of its exclusive economic zone, representing more than 9 million km2. More than 1.5 million French citizens live on these territories and nearly 140,000 reside in countries of the Asia-Pacific region./.