The French Surveillance Frigate “Prairial”, a French naval ship, will be paying a port call in Kota Kinabalu, Sabah from the 5th to the 9th of May. This visit will be the occasion of operational exchanges and exercises with the Malaysian Armed Forces.

With more than 15 million barrels per day, the Strait of Malacca is now challenging Hormuz’s first place as the world oil transit. It is also 40% of the world trade which passes through this narrow entrance less than 3 kilometers wide. These flows cross and drain Southeast Asia, which in the next fifteen years will drive global growth. Four ASEAN countries alone will accumulate, in 2030, a Gross domestic product (GDP) of one trillion dollars.

A fluid, free and unimpeded navigation in the straits of Malacca, Singapore, Sonde, Lombok, Macassar or Omboi and Wetar, as well as in the seas they connect, is therefore one of the essential conditions for the effective functioning of the world economy. France recognises in the 2013 White Paper on Defence and National Security that "a major crisis in Asia would have very serious economic, commercial and financial consequences in Europe". Thus it is important that it contributes to the stability and freedom of navigation of this region and its straits in particular.

Cooperation with the French armed forces, as well as a common attachment to a rules-based global order, form the basis of strategic partnerships with, among others, Malaysia, Singapore and Indonesia, bordering the Strait of Malacca. The State visits by French President François Hollande to these three States from 26 to 29 March, the 28th of March in Kuala Lumpur, provided an opportunity to strengthen ties further.

France strongly supports the vision of the European Union, which wants to contribute, through the implementation of its global strategy, to the effectiveness of regional cooperation initiatives in Defence and Security. Even if our European defenses are not communitarised, the European approach provides an adapted response to the multiple challenges facing the region, combined with the systemic effects of climate change, tensions on resources and population growth. 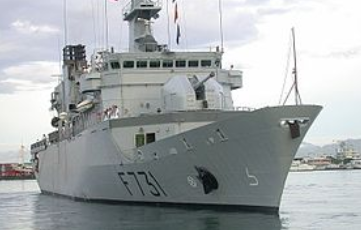 The commitment of France is also very concretely reflected through the regular presence of naval units in these waters, as illustrated by the passage through the Strait of Malacca in April of the Naval Task Force "Jeanne d ’Arc", an operational deployment which contributes to the training of the officers-cadets of the French Navy. The Landing Helicopter Deck (LHD) Mistral and the Frigate Courbet which entered the Indo-Pacific zone on 18 March will continue this deployment in Asia to finish in Guam.

It is in that spirit that the French Surveillance Frigate Prairial, coming from French Polynesia, transited in the Sulu Sea beginning of May, before paying a port call in Kota Kinabalu from the 5th to the 9th of May. This visit will be the occasion of operational exchanges and exercises with the Malaysian Armed Forces.